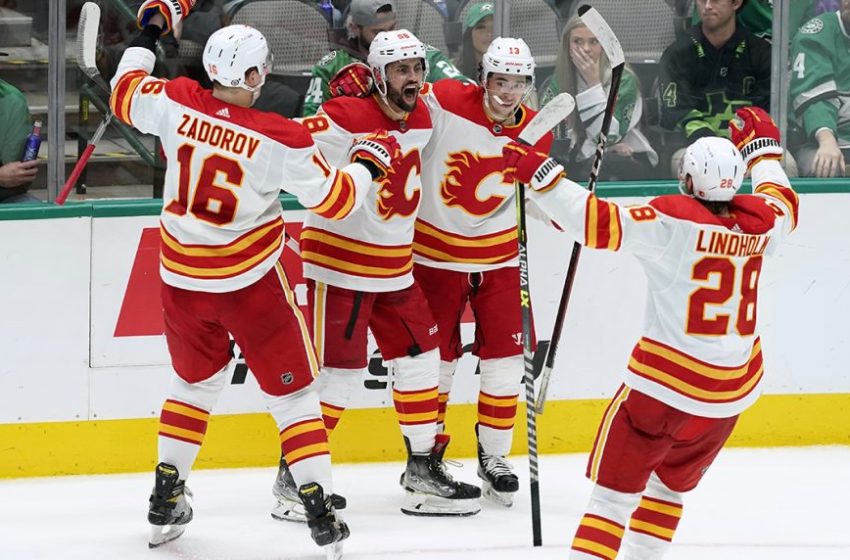 Who would have guessed coming into this season that the Flames would have their second best season in franchise history and win the pacific division with ease? I know I certainly didn’t. But it happened and it was incredible. There were a lot of great moments and performances from the boys in red. Here are some unofficial award winning plays and performances from the regular season that was.

This game was great for so many reasons. First was the fact that it was Adam Fox’s first game at the Saddledome since refusing to sign with the Flames. The C of Red let them know that he was not welcome with constant booing every time he touched the puck. Secondly, Matthew Tkachuk pulled off another between the legs goal, this time while going backwards to the net. This was a great game and a message sender to the rest of the NHL that the Flames are legit.

This was the most entertaining game I have watched in the NHL all season. This game had a little bit of everything. Spectacular plays from Johnny Gaudreau, hits, animosity, hat tricks, and a charged up C of Red crowd. This was easily Johnny Gaudreau’s best performance of the season and one of the best of his career which is saying something.

The April 26 win in Nashville was the closest thing we saw to what playoff hockey could look like from this version of the Calgary Flames. This was an intense, physical, tight checking game that showed what this Flames team is capable of come May 3rd. This was Matthew Tkachuk and Milan Lucic’s best game of the 21/22 season.

The Flames scored a ton of beautiful goals this season. Johnny sniping on breakaway after breakaway. Matthew Tkachuk going between the legs. Elias Lindholm sniping from the slot. Or Tyler Toffoli’s first goal as a Flame.

But for me, the best goal goes to Matthew Tkachuk on March 26th VS Edmonton. This wasn’t necessarily the nicest goal of the season, but it was my favorite for a bunch of reasons.

Doesn’t get much better than that.

Milan Lucic and Scott Sabourin have a great tilt. Sabourin catches Lucic a little off guard to start. But Lucic comes back and ends up beating the wheels off Sabourin.

Matthew Tkachuk makes a great athletic play by keeping the puck from going into the stands during the home opener. I love that Tkachuk does this stuff.

At the end of each season, the Vancouver Canucks give their fans the opportunity to vote on player awards and trophies like most Valuable player, best defenseman, unsung hero, and most exciting player. So I thought I would do the same for the Flames this season. I have created 4 new awards to give out to the Flames players.

Let’s not over think this one. We all know what Johnny has done this season. Leads the NHL in points at 5v5 and even strength. He has the best +/- since Wayne Gretzky. He made Matthew Tkachuk and Elias Lindholm 40 goal scorers. He is a Hart Trophy candidate. He was spectacular this season.

This was a tough call to make as Noah Hanifin and Rasmus Andersson also had great seasons. But Chris Tanev has been the best defender and the most valuable to this Flames team. The most important thing Tanev did this season is take Oliver Kylington under his wing. There was so much uncertainty around who was going to replace Mark Giordano on the left side. I don’t think Kylington has the season he does if he doesn’t play with Chris Tanev.

Tanev’s defensive play at 5v5 and his penalty killing abilities also make him a little more valuable than Hanifin and Andersson.

I’ll let the video speak for itself.

Andrew Mangipane might have had the quietest 35 goal season in recent memory. The most impressive thing about Mangipane’s goal scoring was that he rarely played with any of Gaudreau, Lindholm or Tkachuk at 5 on 5. And he barely played with those guys on the 1st PP unit. This was done playing with the likes of Mikael Backlund, Blake Coleman, Tyler Toffoli, Dillon Dube and Sean Monahan.

Another reason I believe Mangipane is the Flames unsung hero is because I don’t know where the secondary scoring would have come from had Mangipane not had the terrific season he did. Blake Coleman, Sean Monahan, and Mikael Backlund all had some of the lowest scoring rates of their careers, so it was critical that Mangipane stepped up and scored the amount of goals he did.