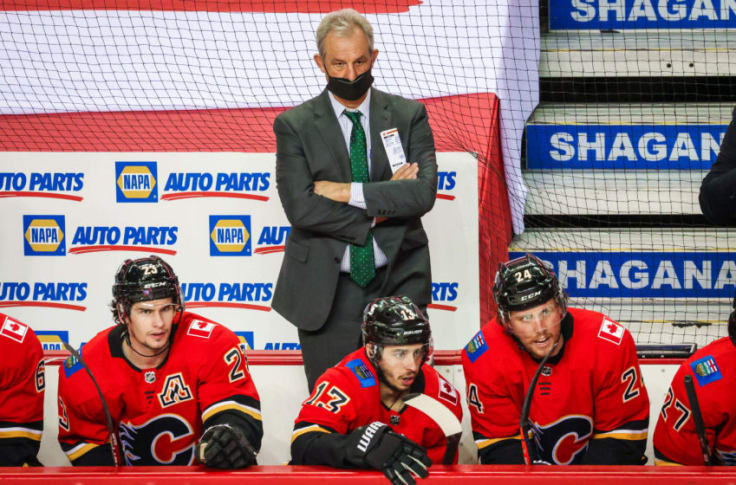 1. Led by Darryl Sutter and Jacob Markstorm, the Flames Will Finish Top 5 in Goals Against in the NHL

One of the few things that I am sure of this season is that the Flames are going to be one of the best defensive teams in the NHL. In the 32 games coached by Darryl Sutter last season, here are the Flames rankings in key defensive metrics:

The Flames were the second best team in the NHL at suppressing shots against and high danger scoring chances against under Coach Sutter. During this period the Flames had the 5th worst save percentage at 5 on 5. If Jacob Markstorm can play like he did at the beginning and end of last season, this Flames team will be incredibly difficult to score against.

The one thing that can get in the way of this prediction coming true is if the defense core completely implodes. The Flames defense group needs a lot of things to go right for them in order to succeed. They need bounce back seasons from Rasmus Andersson and Juuso Valimaki. They need Chris Tanev to maintain his level of play from last season and stay healthy. And they need Nikita Zadorov and Erik Gudbranson to not be liabilities when the puck is on their stick. So many question marks about this group. But the one thing they have going for them is the man behind the bench, Darryl Sutter.

2. Jacob Markstorm Gets Nominated For The Vezina Trophy

Jacob Markstorm was very good last season when healthy. The start and end of last season is what the Flames had expected from their star goalie. Unfortunately, Markstrom suffered a neck injury on February 17th on a collision with former teammate Tanner Pearson. Markstrom was rushed back into the lineup too early and it affected is game greatly.

As you can see by the data, Markstrom was an elite, top 8 or better goalie in the NHL at the beginning and end of last season. A healthy Markstorm playing in front of a Darryl Sutter defensive system will allow him to become a top 3 goalie next season.

3. The Flames Will Lead the NHL in Hits and Fights

The Flames have 5 of the top 70 hitters since the 2018/19 season. That is not including the likes of Brad Richardson, Trevor Lewis and Brett Ritchie who also play a very physical brand of hockey.

The Flames also have 5 of the top 33 players with the most penalty minutes since the 2018/19 season. That may not necessarily be a good thing, but it does play well into the Flames identity of being physical and hard to play against.

Playing at the Scotiabank Saddledome will no longer be a walk in the park like it has been on most nights over the last 6-7 seasons. The Flames should make it one of the toughest places to earn 2 points in the NHL.

4. Johnny Gaudreau, Elias Lindholm, and Matthew Tkachuk all Become Point Per Game Players…. If they Play on the Same Line This Season

The Flames have struck gold with the combination of Gaudreau-Lindholm-Tkachuk as the teams’ top line. This trio has found instant chemistry with one another. It is evident that this trio can produce at the same, if not better levels than the Gaudreau-Monahan-Lindholm line in the 2018/19 season.

This line dominated the Canadian division last season and have been dominate in their short time together in the preseason.

The Flames will likely have a hard time scoring goals this season. Putting 13-28-19 together will definitely help alleviate that problem.

5. Darryl Sutter Will Be Nominated for the Jack Adams Trophy

Make no mistake about it, Darryl Sutter is an elite, short term NHL coach. Everywhere he goes, he wins. He has an ability of taking inferiorly skilled teams and bringing them up to a level where they are able to compete with the best teams in hockey. His brand of physical, aggressive, hard working hockey has created very strong, short term results for the teams he has coached.

In Sutter’s first season as head coach in Chicago, he led the Hawks to a first place finish in the Norris Division with a record of 47-25-12. Sutter also led the Hawks to a conference final birth vs the Detroit Red Wings in 1994-95.

The expansion San Jose Sharks were one of the worst franchises in the NHL for their first 6 years, failing to make the playoffs in all but two years. Darryl Sutter arrived in 1997-98 and completely turned around that franchise. He led a team that lacked talent to 5 straight playoff appearances which included a 2nd and 1st place finish in the Pacific Division in his last 2 full years as head coach.

We all know what he did in Calgary making it to the Stanley Cup Final in 2004 and winning the Northwest Division in 2006.

And finally, he won 2 Stanley cups in his first 3 seasons with the LA Kings.

Everywhere he goes, he wins. And I think that will happen this year with the Flames in a bad Pacific Division.

All data used in this article is from Natural Stat Trick