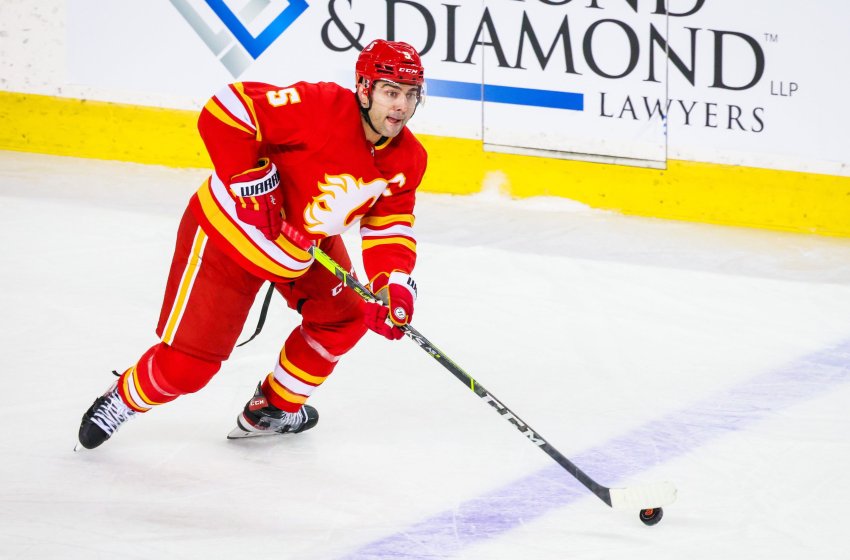 The hottest topic in Calgary when it comes to the Flames is what is going to happen with the Seattle expansion draft. Many possibilities have been thrown around as to what will occur. Will the Flames trade assets for Seattle not to select Mark Giordano? Will the Kraken take local product Derek Ryan like Vegas did with Deryk Engelland? Will Seattle go young and take Matthew Phillips?

One thing that has not been debated is the idea of the Flames going with an 8-skater protection model to keep Mark Giordano.

Here is the breakdown of who would be protected in each model.

Here are the arguments you could make for the Flames exposing Dube, Monahan and Backlund, and keeping Mark Giordano.

You Can’t Lose Giordano For Nothing

We all know the incredible story of Mark Giordano. The 8-year captain of the Flames has been a pillar of stability both on and off the ice. He has won a Norris Trophy and the Muhammad Ali Sports Humanitarian Award at the ESPY’s. It would be very difficult to say goodbye to this type of player and person via an expansion draft.

It has been reported that Seattle is extorting teams who want to keep a certain exposed player. The Flames would likely have to give up their first-round pick (12th overall) in this year’s draft to ensure Seattle doesn’t select him. That is a lot to give up to keep the captain. Would Darryl Sutter and Brad Treliving be willing to lose one of their forwards instead of Giordano or trading a 1st round pick to keep him?

Then there is the Sutter factor. I have a hard time seeing a world where Darryl Sutter will allow the Flames to let Giordano go for nothing. I believe Darryl Sutter will have a major influence on the moves that are made this offseason. Sutter was hired to get the Flames into the playoffs over the next couple seasons. I don’t think Sutter believes they can do it if they lose their number 1, shutdown defenseman. The Head Coach of the Flames played Giordano 25+ minutes in 8 of the last 16 games of the season. He and Chris Tanev were one of the better shut down pairs in the NHL. If it were up to Darryl, I bet he would keep Giordano.

Sutter Did Not Trust Dube

Darryl Sutter was very critical of Dillon Dube’s game this past season. Dube, who is clearly good enough to play in the Flames top 9, was a healthy scratch 5 times under Sutter. In 19 of 32 games under Sutter, Dube played less than 14:00 minutes. You have to ask the question, “Is Darryl Sutter willing to lose Mark Giordano for nothing to keep Dillon Dube?”. Sutter consistently critiqued Dube’s game in the media and would often bench him.

Another thing to take into consideration is that Dube is a left shot. The LW depth chart for the Flames is deep with Gaudreau, Tkachuk, and Mangipane all ahead of Dube. He and Matthew Tkachuk have played right wing in the past. But most coaches would prefer to have right shots playing on the right side.

Another thing to consider is that the Flames top prospect, Jakob Pelletier also shoots left. Could Pelletier act as a replacement for Dube if he is selected in the expansion draft?

Sean Monahan’s game has gone in the wrong direction over the last couple seasons. The problem with Monahan is that he provides little value to the Flames when he is not scoring goals. Unfortunately, he has not been scoring much recently. He has also had injury troubles with his hip and wrist. On top of all that he makes $6,375,000 a season. The Flames need more production and impact on the game from a player making that much money.

Many of the big NHL insiders have speculated that Monahan is on the trading block. I don’t think he has much value anymore. If the Flames were to trade him, they would likely acquire a draft pick and would have to eat salary or take a contract back. Would it be better for the Flames to leave Monahan unprotected and lose him to Seattle? If Seattle does take him, it opens up $6,375,000 worth of cap space that they can use to pick up an upgrade on Monahan.

Mikael Backlund has been an incredible player for the Flames. He has always been a bright spot on the Flames roster, even in the years they’ve missed the playoffs. You always know what you’re going to get from him. But Backlund is 32 years old. He has played a ton of games in the NHL, and has played hard minutes in them. Aging curves would suggest that Backlund is a prime candidate to regress over the last 3 years of his contract. Not everyone is Mark Giordano who can play into their late 30’s at a high level. The vast majority of players end up declining once they hit 30–32-year-old range.

Salary is also a factor in this. Backlund makes $5,350,000 for 3 more years. Do we really think he can live up to that value in his 32–35-year-old seasons? If the Flames lose him in expansion, it gives them flexibility to pick up someone younger and cheaper to fill Backlund’s role.

Ownership and management of the Flames might be asking themselves “Out of Backlund, Monahan, Dube and Giordano, who gives us the best shot at making the playoffs over the next 2-3 seasons?”. The answer to that question is Mark Giordano. That is a short-sighted answer. But this is a short-sighted organization. The last 17 years have taught us that the Flames are a team who prioritizes playoff revenue, no matter what state their team is in. Their philosophy is “get into the playoffs and anything can happen”. Because of this, would they be willing to lose a Dillon Dube, Sean Monahan, or Mikael Backlund to keep their captain and number 1 defenseman to give themselves the best chance to make the playoffs in the next couple seasons?

I personally don’t think the Flames should go to the 8-1 model. But I think it’s an interesting conversation to have. The Flames love Mark Giordano and it would not surprise me to see them do everything they can to protect him from Seattle. And that might mean protecting the top 4 defensemen in the 8 skater 1 goalie model.