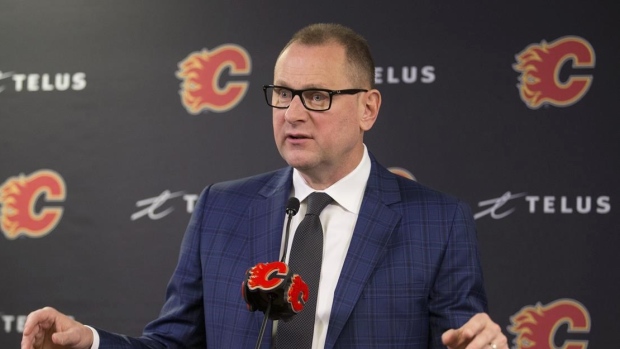 The Calgary Flames need to significantly overhaul their roster this summer. The current core group of players have not been good enough for Brad Treliving and his management team. The first big domino to fall this summer will likely be Mark Giordano being selected in the expansion draft on July 21st. Although that is a big change, I still think there needs to be more.

After analyzing the 31 NHL rosters on CapFriendly, I have found that there are not many natural trade partners for the Flames this offseason.

But there is one team who I think the Flames can make a franchise altering trade with.

Why Are They The Right Fit?

Arizona is looking to completely blow up their team this summer. They are about to embark on a scorched earth style rebuild. Every player except Jakob Chychrun can be had for the right price. The Coyotes are going to be looking to offload salary, acquire young players, and amass a ton of draft picks.

The Flames on the other hand are looking to do a re-tool rather than a rebuild. Flames ownership has given Brad Treliving and his management group the marching orders to do everything they can to make the playoffs. Calgary will be looking to bolster their top 6 forward group, add speed to the bottom of the lineup, and find a replacement for Mark Giordano on the left side of the defense.

There is a match between these two teams. Calgary has a surplus of draft pick from the James Neal, Sam Bennett, and David Rittich trades. And Arizona is looking to offload some big contracts.

Because of this I think they are the perfect match for a MEGA TRADE.

***Please note this is me trying to have fun and spark conversation and debate. Please don’t rage tweet me. 😀

Here is why this deal could make sense.

1. The Entry Draft is a complete unknown. It has been very difficult for scouts to make accurate assessments of the players. If there is one year for the Flames to give up these types of picks, its this year.

2. Flames give up their own 2021 picks, and some of the picks they acquired for Neal, Bennett, and Rittich. They keep their 2022 and 2023 1st, 2nd, and 3rd round picks so they can use them on an offer sheet if they want to go down that road. Gives them that flexibility.

3. Every player going to Calgary from Arizona has been linked in trade rumors this and last offseason.

5. The Calgary players are all replaceable. Monahan doesn’t fit in with this team anymore. Lucic makes too much money for a 4th liner, Dube is fourth on the Flames LW depth chart and he and Sutter did not see eye to eye. Kylington won’t be back. Gawdin is a mediocre prospect.

6. Arizona’s number one priority this offseason is to shed contracts and save money in the long term. Arizona won’t save much in terms of salary in the next two years (unless they trade Sean Monahan), but years 3-6 they will save on Dvorak’s and OEL’s contracts.

7. Brad Treliving and Don Maloney have a strong connection to Arizona because they used to be the AGM and GM there. They were also in place when they drafted OEL in the first round in 2009.

8. ARZ is looking for culture setters. They said Ladd could be that guy after acquiring him on July 17th. I think you could add Lucic and Monahan into that conversation.

9. Brad Treliving’s job is on the line. He needs to do something major to improve his team.

If this trade is made it completely changes the dynamic of the Flames roster and it gives them one of the best forward groups in the Western Conference.

If they lose Giordano in expansion and make this trade, here is what the roster would look like. They would have over $10,000,000 to spend on areas like 3rd line wingers (If they don’t think Pelletier or Phillips are ready), 4th line LW, Third Pairing RD, and a backup goalie. I wouldn’t want them spending too much money and term on those positions because raises are due for Mangipane, Gaudreau and Tkachuk next offseason.

I know this is extremely unlikely to happen, but I think it would make the Flames significantly better. An upgraded roster, a full season of Darryl Sutter and a healthy Jacob Markstom could make for an exciting 2021/22 season.