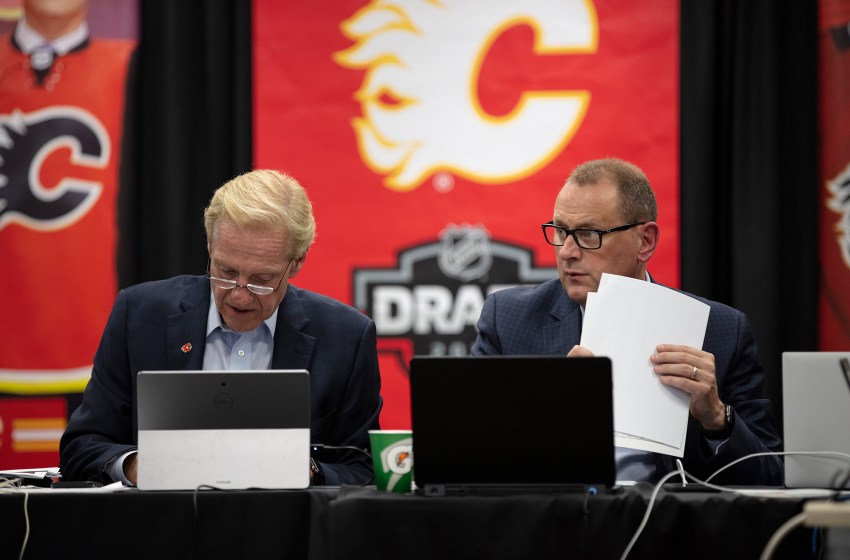 The Calgary Flames head into free agency with some pretty significant holes to fill in their lineup and only have $18,625,000 to work with. Here are the vacant positions on their roster:

The free agent options are few and far between for a top 6 RW. I would suspect the Flames will address that need via trade. Because of this I will not provide any top 6 right wing options. I don’t think it’s realistic to think players like Kyle Palmeri or Blake Coleman will come to Calgary.

But they can fill some other holes of their roster through free agency which begins tomorrow at 10 am MT.

I want to stress that this is an article about who I think the Flames will target, not who I want them to target.

My guess is that they will not make a big time splash in free agency. I see this as an opportunity to add inexpensive depth to their roster. The major changes should come via trade or offer sheet.

James Reimer seems like a logical fit to become the backup to Jacob Markstrom. Reimer has had two solid years in a row in Carolina posting a record of 29-11-4 with a GAA of 2.66 and a .910 SV%. He will only be required to play approximately 20-25 games which is a workload he is used to playing. He lives in Kelowna in the summer and his wife is from Western Canada. He has a great personality and will be a great high character addition to the Flames locker room which will want to add more veteran voices with the departure of Mark Giordano.

Originally drafted by the Flames in the 6th round of the 2011 NHL draft, Laurent Brossoit would be a nice addition to this Calgary roster. His 2018/19 and 2020/21 seasons were well above average for a backup goalie. In those two seasons he posted a 2.52 and 2.42 GAA and save percentages of 0.925% and 0.918%. He did see a dip in his numbers in 2019/20, but I think he is a better goalie than that one season would suggest. Brossoit is used to only playing 20-25 games as he backed up Vezina Trophy winning goalie Connor Hellebuyck, which is what he’ll likely see in Calgary backing up Jacob Markstrom.

I personally do not want this to happen, but it would not surprise me in the least if Calgary showed interest in this player. He has Brad Treliving and Darryl Sutter written all over him. He is a big, physical, tough player who can win puck battles, clear the front of the net and stick up for teammates. Sutter and Treliving will likely want to add size to the defense after watching how important big defensemen were in this most recent Stanley Cup Playoffs. Gudbranson only played in 9 games last season so he should be an inexpensive signing.

Poolman will be a cost-effective option for the Flames. He is a defensive specialist who can play 14-16 minutes a night and play on a second PK unit. He won’t blow you away with any specific skills, he is just an average third pairing defenseman. Tuckers younger brother, Colton, is in the Flames organization playing for the Stockton Heat. Tucker Poolman would be lower on my list of available RD, but I can see the Flames having interest in this player.

One other guy I thought about was Jani Hakanpaa from Carolina. But I think there will be a ton of teams interested in his services. I don’t think it’s realistic to think he would choose Calgary over 15-20 other teams.

The Flames could continue to pluck players from the Vancouver Canucks as Alex Edler hits the market. The Flames have shown interest in Edler in the past. In 2019 they tried to swing a deal for Edler. The rumored package going the other way was Oliver Kylington and a 2nd round pick. Edler refused to waive his NMC which ultimately negated the trade. I hope the Flames do not acquire this player. He no longer has the foot speed to keep up in a top 4 role in the NHL. The Canucks got badly outshot when he was on the ice as his CF% was 39.6%. Edler also took a ton of minor penalties due to his skating. I think this has disaster written all over it, but I know the Flames like this player.

The former 2nd overall pick in 2012 has not lived up to his draft status as injuries have ruined any chance of Murray playing at a top pair level. When healthy, he is an adequate defenseman. Murray struggled in New Jersey last season as almost all his possession stats were in the negatives. Elliott Freidman was on with Pat Steinberg on the Fan 960 Monday afternoon, and he dropped Murrays name a couple times when talking about a potential Mark Giordano replacement. This would also be a bad move for the Flames. Murray can’t stay healthy and is a liability defensively. But he has been linked to Calgary, which is why I have included him on this list.

McCabe should be the number 1 target of Brad Treliving to fill the LD position in his roster. McCabe is an underrated defensive specialist. Not many people have focused in on his game because he has played on bad Buffalo Sabres teams for the last 6 seasons. I think he would be a great fit on a 2nd pairing with Rasmus Andersson. He is coming off a significant knee injury, but that should bring down the acquisition cost for Calgary.

There are not a lot of good options here for the Flames. But I believe they will make 1 move to add to the depth of their forward group.

I know this isn’t the sexiest name on the open market, but it’s one who I think the Flames will sign. Lewis has a history with Darryl Sutter as he played for him in all 6 seasons while he was the Head Coach of the LA Kings. This is a player who Sutter trusts to play his system to a tee, and provide hard minutes on the 4th line and penalty kill. He could also bring some leadership to their locker room. Lewis played in 56 games last year scoring 5 goals and 5 assists.

I can see a world where the Flames bring in Darryl’s nephew, Brandon to play 3rd/4th line center for the team next season. Sutter is a defensively responsible center who can chip in with some above average goal scoring. He has a high end shot but lacks play making ability. Darryl Sutter will be able to use Sutter for key defensive zone faceoffs and play on the PK. He scored 9 goals in 43 games in a limited role for Vancouver. Sutter has high character and leadership skills that Brad Treliving covets in players. Because of this, I can see him ending up in Calgary.