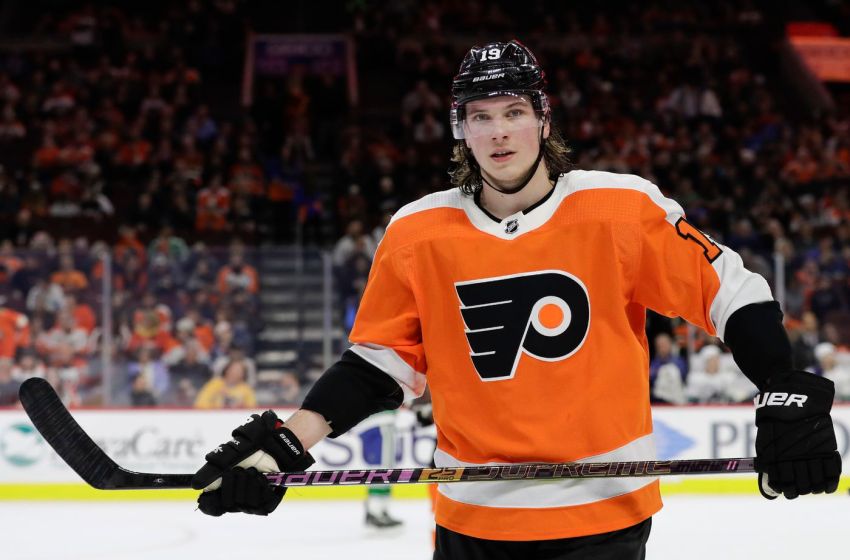 The Flames are in a tough spot this offseaon. They desperately need to add speed and skill to their bottom 9 forward group. But they do not have the cap flexibility to acquire a high-end UFA this summer, and they don’t have a deep enough prospect pool to be trading for expensive assets like a Rickard Rakell or Sam Reinhart. The smartest way to improve this offseason is by trading or offer sheeting inexpensive, young players with potential. The Flames should be trying to take advantage of teams in cap trouble, expansion trouble, or a team who is looking to make a major shakeup. A player who fits this bill is Flyers center Nolan Patrick.

Nolan Patrick was drafted 2nd overall in the 2017 draft. The highly touted prospect lit up the WHL with the Brandon Wheat Kings. Some NHL teams had Patrick rated #1 on their draft boards. Unfortunately, Patrick has been dealing with injuries since his final year in the WHL in 2016/17. Most recently Patrick had a migraine disorder which kept him out of the entire 2019-2020 season.

Although Patrick’s NHL career has not got off to a hot start, I still think he has the potential to be a good player. Patrick looks like a prime buy low candidate for this offseason. He has fallen out of favor with the Flyers and he will be available on the trade market.

If Nolan Patrick will be a solid NHL player if he can stay healthy. He has shown flashes of brilliance in his young career. In his 2015/16 WHL season he dominated scoring 102 points in only 72 games and was named WHL Playoff MVP as a 17-year-old. He started out his NHL career with back-to-back 13 goal seasons with the Flyers. The vast majority of his points have come at even strength which is also encouraging. He is big, skilled, and creative with the puck and is a +50% in the faceoff circle over his career.

Patrick will be heading into a NHL training camp healthy for the first time in years. It takes time for players to come back from significant time off. Patrick will be fresh and ready to go for the 2021/2022 season.

Patrick’s situation in Philly reminds me a lot of what the Flames just went through with Sam Bennett. The Flames highest pick in team history was traded to the Florida Panthers this past trade deadline. Bennett has flourished in Florida. Bennett was put on the Panthers second line with Jonathan Huberdeau and given second unit powerplay time. He was given a fresh start and an opportunity to succeed. Something he did not get in Calgary. So far it has worked. I think the same thing can happen with Nolan Patrick. He has the upside to be a #2 center in the NHL one day.

There are two reasons why Patrick will be available on the trade market. First, there are rumors that Philly is ready to move on from Patrick. It sounds like the two parties are ready to split. Patrick recently hired a new agent (his third agent in 3 NHL seasons) which has sparked speculation that he wants out of Philly. And they Flyers are looking to make some major changes to their lineup this offseason. Swapping out Patrick would be one way to shake things up.

The other reason he is available is because of the Flyers expansion predicament. The Flyers will go with a 7-3-1 protection model. 6 of the seven forwards who will be protected are Claude Giroux (NMC), Kevin Hayes (NMC), Travis Konecny, Sean Couturier, Oskar Lindblom, and Scott Laughton. The final spot can be used on James van Riemsdyk, Nicolas Aube-Kubel, Jakub Voracek or Nolan Patrick. If the Flyers decide not to protect Patrick, would they want to lose him for nothing to Seattle? We are talking about the 2nd overall pick just 4 years ago. From an asset management perspective, they can’t let him go for nothing.

Why The Flames Would Want Him

Assuming Derek Ryan tests free agency and Sean Monahan is traded this offseason, the Flames will need to bring in another center. There are not a lot of inexpensive, right shot centermen available this summer. Patrick could slot in as the 3rd line center behind Elias Lindholm and Mikael Backlund. He would fit the mold of what the Flames are looking for. A big, right shot, skilled C to drive a third line. The Flames have the draft capital to make this deal happen. My guess is a 2nd or 3rd round pick gets this done.

The Flames have a hole at the third line center position in their lineup. It needs to be filled by an inexpensive, right shot with upside. Nolan Patrick is a great option to fill that hole.