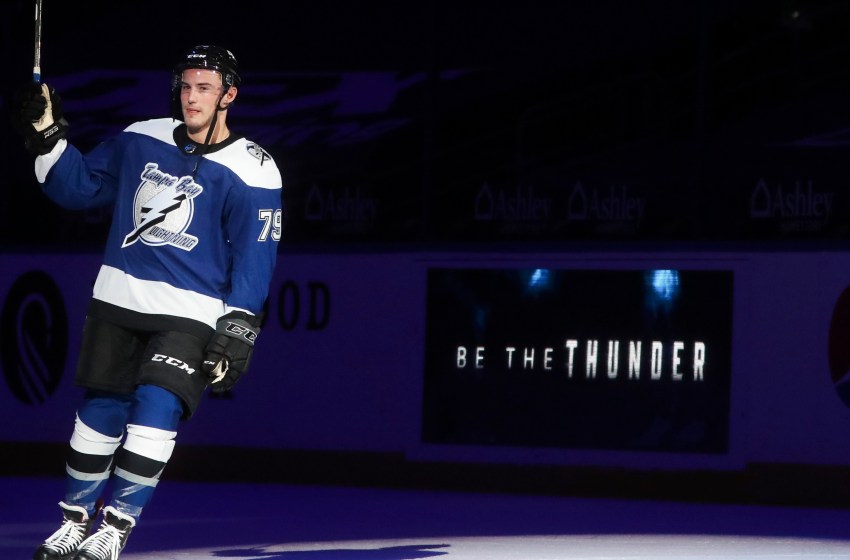 The Calgary Flames head into this offseason needing to change the mix in their forward group. There has been lots of talk around high end, expensive players like Jack Eichel, Sam Reinhart, Connor Garland, and Rickard Rakell. But I don’t think the Flames are in a position to be trading 1st round picks or prospects for players with big salaries. They do not have a lot of cap flexibility, and they don’t have a deep enough prospect pool to be trading away those assets. They need to get creative and find inexpensive talent who have not had an opportunity to thrive at the NHL level.

Ross Colton is one of those players.

The 2021 season was Ross Colton’s first in the NHL as he played 30 games for the Tampa Bay Lightning. Colton played on the 4th line with Tyler Johnson and Patrick Maroon for most of the season. Colton is another fast, skilled, and tenacious player that has been developed in the Tampa Bay system. No other team has been able to develop forwards like the Lightning have over the last decade.

Colton is a prime example of a very good player who has not had an opportunity to flourish at the NHL level. Colton scored 9 goals and 3 assists in 30 games for the Lightning this season. He was 6th on the team in even strength goals finishing ahead of Steven Stamkos, Anthony Cerelli, and Ondrej Palat. He did that while playing on their 4th line, and in 30 games.

Colton brings a lot to the table. He is a great skater, forechecker and shooter. He reminds me of Andrew Mangipane with his work ethic, shot, and ability to wreak havoc in the offensive zone. He is exactly the kind of player the Flames need on their third line.

Tampa Bay is in one of the great salary cap crunches we have seen since it was was introduced in 2005. As of July 2nd, the Lightning have 19 players signed for next season with a projected cap hit of $86,566,666. They don’t have a full roster for next season and they’re still considerably over the salary cap. They will lose a piece in the expansion draft which will help. But even if they lose an Alex Kilorn or Tyler Johnson, they will still be over the cap and have one less body on the roster. Because of this, they will not be able to afford to pay Colton anything more than a league minimum salary.

How To Acquire Him

There are 2 ways the Flames can acquire Ross Colton.

The most creative and inexpensive way to acquire this player is through an offer sheet.

Here is the offer sheet compensation breakdown for this offseason:

The Calgary Flames can sign Colton to a 1- or 2-year offer sheet with an AAV of $1,356,540 and give up no compensation. It is like Colton is a UFA. It would be very difficult for Tampa Bay to match that offer. Tampa can’t afford to pay 1.3M for someone to play on their 4th line.

It is inexcusable for an NHL team not to take advantage of this type of offer sheet on the best team in hockey. It is a legal way to acquire players and I think it is ridiculous that the NHL old boys club won’t take advantage of this. This is a golden opportunity for the rest of the teams in the NHL to take a shot at Tampa Bay. Colton has the potential to turn into the next Alex Kilorn or Ondrej Palat. So why not pry him loose via an offer sheet and not pay any compensation?

The Flames are in a position where they need to acquire inexpensive, young talent. This offseason will present enormous opportunities for a team like Calgary to take advantage of teams up against the salary cap and who have expansion problems. The Flames need to get creative to improve their team. Signing 30+ year olds to big free agent contracts or trading high quality draft picks for veteran players has not worked for this management group. Time to for Brad Treliving, Don Maloney, and Craig Conroy to start thinking differently. Offer sheeting Ross Colton would be a great start.