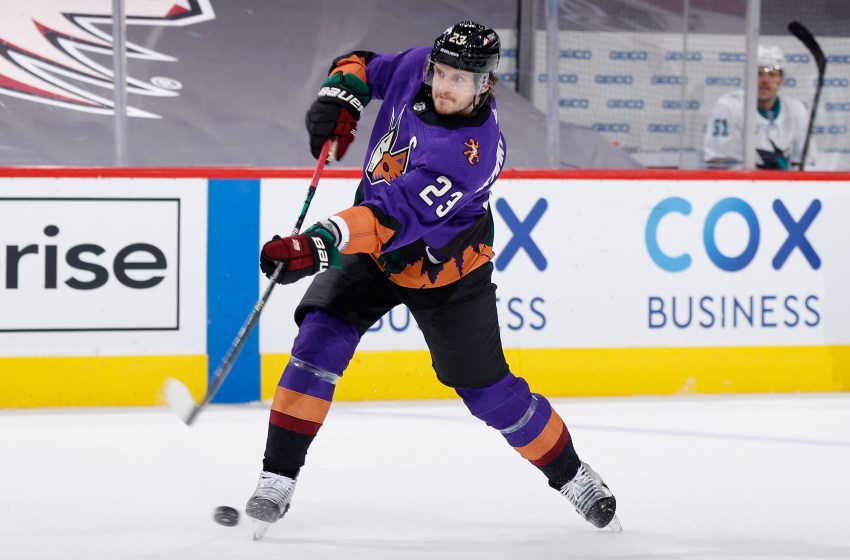 GLENDALE, ARIZONA – MARCH 27: Oliver Ekman-Larsson #23 of the Arizona Coyotes shoots the puck against the San Jose Sharks during the NHL game at Gila River Arena on March 27, 2021 in Glendale, Arizona. The Coyotes defeated the Sharks 4-0. (Photo by Christian Petersen/Getty Images)

We are less than 2 weeks away from the Flames having to submit their expansion protection list. The Flames are likely going to go with the 7-3-1 protection model. They will protect Johnny Gaudreau, Matthew Tkachuk, Elias Lindholm, Andrew Mangipane, Mikael Backlund, Sean Monahan, Dillon Dube, Chris Tanev, Rasmus Andersson, Noah Hanifin, and Jacob Markstrom.

If Giordano were to leave Calgary via trade or expansion, they would need to find a suitable replacement on the left side. Juuso Valimaki and Noah Hanifin are not ready to take on top pairing responsibilities at this point in their careers.

Who could the Flames target to either take over Giordano’s minutes or split them up by committee?

Here are some left shot defensemen who are available this offseason.

The Arizona Coyotes captain and the team have come to an agreement to move on from one another. Last offseason, Ekman-Larsson only gave the Coyotes two teams we would go to, Vancouver and Boston. But that list is going to expand. Because of OEL’s history with Don Maloney and Brad Treliving, Calgary will be interested.

OEL will be 30 years old to start next season and has 6 years left on his contract with an AAV of $8,250,000. Ekman-Larsson is too rich for my blood. He makes too much money and has too much term left on his deal. The only way the Flames could make this work is if Arizona eats salary on this deal and they take on a bad contract like Milan Lucic.

But there is a history with this player and the current Flames management group. Don Maloney was the GM and Brad Treliving was the Assistant GM when Arizona drafted him in 2009. I think both of them have a lot of respect for OEL’s game. I could see them being very interested in this player if Giordano is no longer a Flame.

Elliott Friedman has reported that Duncan Keith has asked Chicago to explore a trade to the Pacific Northwest or Western Canada. All signs point to the Oilers being the front runners for Keith’s services. But if that deal falls through, and the Flames lose Giordano, then Keith might be an option for Brad Treliving.

Keith has not been great the last couple seasons. He struggles mightily against the rush, and he has been turning a lot of pucks over in his own zone. But he has played top pairing minutes with young, inexperienced defensemen like Ian Mitchell and Adam Boqvist. It is tough for a 38-year-old to dominate possession when he is playing with inexperienced partners and against other teams’ top lines.

I think Keith can still be a valuable player in a smaller role. He can still be effective playing on a second pairing and 1st PK unit. Play 19-20 minutes a night. And I think he could succeed under Sutter’s system.

The Flames would need Chicago to eat 1-2 million dollars of salary to make this deal work.

Vince Dunn has been available on the trade market for the last two seasons. The left shot D has played on St. Louis’s 2nd and 3rd pair. He is a great skater and has offensive upside. In his last 13 games of the season, he had 11 points. He is more of a puck mover than a defensive specialist.

Dunn is 24 years old and a restricted free agent. The Flames could either make a trade or an offer sheet for this player. The most realistic course of action would be a trade. Dunn will be looking for good money. The Flames could sign him to a bridge deal in the $2,500,000-$3,000,000 range.

Nate Schmidt had a miserable year with the Canucks. He was acquired for a third round pick last offseason. He did not seem like a great fit from the start. He didn’t fit in with Travis Greens defensive system, he wasn’t able to rush the puck as much as he did in Vegas. And on top of everything he dealt with a nasty COVID-19 illness that took a toll on him and his teammates.

Schmidt is a great skater and puck mover. When he is on top of his game, he is joining the rush and using his skating to help him on the defensive side. Schmidt is also a great teammate and can light up a locker room with his personality.

The Flames acquiring Adam Pelech is a little far fetched because the only way to acquire him would be through a big time offer sheet. Pelech was part of the best shut down D pairing in the NHL last season with Ryan Pulock. He is a left shot, smart, smooth skating defenseman. He won’t put up a ton of points, but he impresses with his smarts and defensive mind. He would be a perfect replacement for Mark Giordano.

The Islanders are in cap trouble. They won’t be able to handle a large offer sheet. A 6 year 36.6 million dollar offer sheet would likely get this deal done. It would only cost the Flames a 1st and 3rd round pick for one of the premier shut down defensemen in the game. But we all know that offer sheets don’t happen often, especially to teams run by Lou Lamoriello.