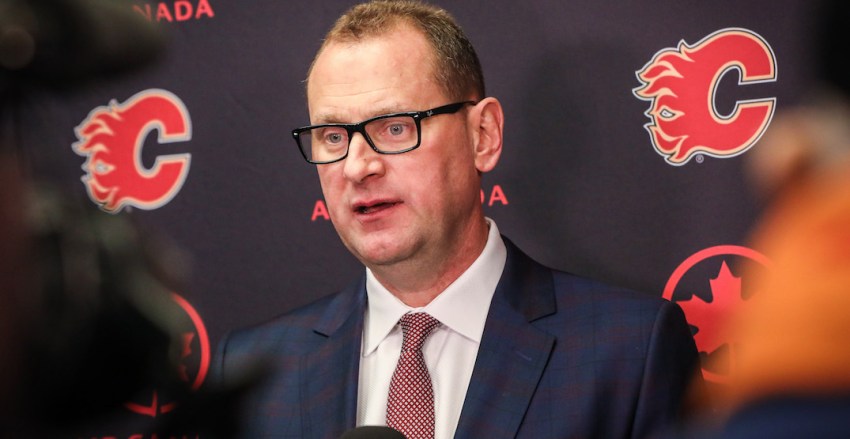 Feb 24, 2018; Calgary, Alberta, CAN; Calgary Flames General Manager Brad Treliving during interview prior to the game between the Calgary Flames and the Colorado Avalanche at Scotiabank Saddledome. Mandatory Credit: Sergei Belski-USA TODAY Sports

During the Brad Treliving era, the Flames have had their ups and downs as an organization. One area where they have struggled is with their pro scouting and talent evaluation. This includes their NHL free agent signings and trades where they are adding NHL players to their roster. Over the last 8 seasons, Treliving and his management teams have struggled to find the right pieces to surround the core of Tkachuk, Gaudreau, Monahan, Backlund and Giordano.

Brad Treliving has made 8 significant trades that involve NHL players coming to Calgary to add to the core of the team. The players he has acquired in those deals are Dougie Hamilton (which turned into Elias Lindholm and Noah Hanifin), Brian Elliott, Michael Stone, Curtis Lazar, Mike Smith, Travis Hamonic, and Nikita Zadorov.

These additions via trade are simply not good enough for a team who keeps saying that their goal is to win a Stanley Cup. Dougie Hamilton, who turned into Elias Lindholm and Noah Hanifin, have all been nice additions and examples of strong player evaluation, especially Hamilton and Lindholm. They identified young players who were in need of an elevated role to get to the next level in their careers. Both Hamilton and Lindholm had strong counting and underlying statistics during their time in Boston and Carolina. Those are the types of moves I wish the Flames had made more often.

Brian Elliott, Mike Smith, Michael Stone, Travis Hamonic and Curtis Lazar were supposed to be additions that help get the Flames to the next level. Unfortunately, these trades turned out to be harmful to the long-term health of the Flames roster, considering the draft capital that was given up for them. The Flames traded the following 8 draft picks to acquire those players:

That is an incredible amount of draft capital to be trading for players who don’t help you win any hockey games and make you better in the long run. The Flames talent evaluation and pro scouting has to improve so they don’t make these types of mistakes again.

The Flames have not done much better with unrestricted free agency. Free agency is the time when team overpay for players the most. Smart General Managers use free agency as a time to add inexpensive depth to their roster and maybe find a diamond in the rough. The Flames have done that a few times in the last 8 seasons. Michael Frolik, Kris Versteeg, David Rittich, Austin Czarnik, Derek Ryan and Cam Talbot are some other examples of very smart, low risk acquisitions by Treliving and the pro scouting staff. These were players signed to relatively inexpensive deals that can outperform their contract. Those are the kinds of deals you want to see made on a consistent basis.

But unfortunately, the Flames management team continues to show how much value they put in intangibles over on ice play by signing Troy Brouwer and James Neal to 4 and 5 year deals respectively.

Both those deals were disasters as the Flames ended up buying out Troy Brouwer after two seasons, and trading James Neal for Milan Lucic 1 year into his contract. These were major misses by the Flames and examples of poor player evaluation. The Flames dedicated $7,250,000 in cap space to James Neal and Troy Brouwer (Troy Brouwer’s buyout cost the Flames $1,500,000) In the historic 2018/19 season where they finished 1st in the west and 2nd in the NHL. They could have easily acquired a legitimate star RW like Mark Stone with that $7,250,000 to help put the team over the top. This is why pro scouting and player evaluation is so critically important.

The Flames have also signed Jacob Markstrom and Chris Tanev to long term deals in free agency. It is too early in their time in Calgary to give fair analysis of those contracts.

Why is This Happening?

A potential reason as to why the Flames continue to make poor decisions is because their pro scouting and analytics departments are scarce compared to winning organizations.

The Flames have 1 full time North American professional scout listed on their website, Steve Pleau. They also have two Assistant Directors of Scouting, Fred Parker, and Rob Sumner. I am not sure if they look after the pro side or amateur. I would assume a mix of both.

I don’t understand how you think you can be successful in the NHL if you only have 1 full time pro scout. That means Steve Pleau is responsible for covering the NHL, AHL and ECHL. That is a lot of work and pressure on Pleau. The Flames need more boots on the ground at rinks across North America. Their current staff is not getting the job done.

This tells me that Brad Treliving, Don Maloney, and Craig Conroy have a major influence in pro scouting and talent evaluation. That’s not unusual for upper management to have a large say. But what is unusual is that they don’t have the proper number of support staff to insulate their talent evaluation process. It is difficult to stay on top of the NHL and AHL, especially while managing your day-to-day duties.

I took a look at the number of professional scouts on the top 8 teams of the 2010’s.

(I excluded Washington because their website does not decipher who is a pro or amateur scout).

As you can see, the top teams of the 2010’s all have more pro scouts listed on their website compared to the Calgary Flames. I give the Flames ownership group credit that they spend to the cap every year. But I think it is time for them to spend more on the front office to help make better decisions. It’s great to spend to the cap, but it doesn’t do much if you continually add inefficient contracts year after year.

Analytics departments have also become extremely important when evaluating talent at the professional level. Data and analytics are an important, unbiased tool for player evaluations and acquisitions. The Flames have one of the smallest analytics departments in the NHL. They have two publicly listed employees working in data and analytics, Chris Snow and David Johnson. Snow has been in his role since the Jay Feaster days leading this department. David Johnson used to run the websites puckalytics.com and hockeyanalysis.com, two go to analytics website for hockey fans before he was hired.  It sounds like Johnson has been very helpful with the development of the Flames custom data base of video and statistics.

The Flames need to add another body or two to this department. It would be nice to see them add data scientist’s to the organization to bring some new ideas to the table. Great organizations have a lot of different voices and opinions in their front offices. They also need opinions that are objective, and just look at what the player has done on the ice. The Flames management team tends to put too much stock in the importance of intangibles like leadership, character, and playoff experience. Analytics departments are really good at giving a sober second thought about a players current and future abilities.

Maybe another analytics member or professional scout could have brought different opinions to the table when the management team was debating the Troy Brouwer and James Neal signings. Or the Travis Hamonic and Curtis Lazar trades.

I don’t want this to be an article about ripping Brad Treliving. No GM is perfect. Every GM makes mistakes in the NHL. But the key is to surround yourself with the right number of people to help with the player evaluation and decision-making process. Limiting big mistakes is crucial in building a Stanley Cup contender. The Flames have not done that.