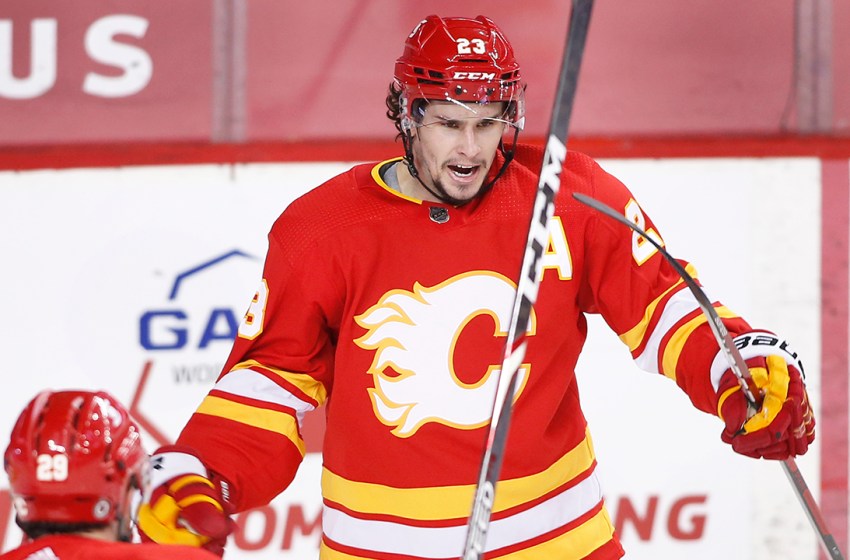 The Calgary Flames have got off to a great start this season as they are sitting in 1st place in the Pacific Division as of December 11th. The strong start has been led by elite coaching from Darryl Sutter, high end goaltending from Jacob Markstrom and Dan Vladar, and top notch scoring from Gaudreau, Tkachuk, Lindholm and Mangipane.

A lot has gone right for this Flames team so far. But what will happen this season when inevitably the top line goes cold? When Jacob Markstrom hits a rough patch? When a top player gets hurt?

They’ll need to rely on their depth and secondary scoring to get them through it. But unfortunately, that has not been there to start this year.

Blake Coleman, Sean Monahan, Mikael Backlund, Dillon Dube, Tyler Pitlick, and the defense core, all need to step their offensive game up if the Flames want to continue to have success this season and win playoff rounds.

Almost every forward listed above is having a career worst season to start this campaign. Here is what those players are on track to produce over an 82-game season:

It’s not like these players are slightly off their career averages. They are all having some of the worst offensive seasons of their NHL tenures so far.

The crazy one to me is Sean Monahan. Monahan has 3 goals and 9 assists so far this season. 4 of his 12 points have come at 5 on 5. Monahan is on pace for (12) 5 on 5 points this season. If you go back and look at the last 82 game regular season in 2018/2019, you’ll see that Monahan is producing at the same rate as players like Marcus Kruger, Pierre-Eduard Bellemare, Nate Thompson, and Vladimir Sobotka at 5 on 5. Those were all 4th liner players at the time. Monahan’s steep fall from grace has been hard to watch.

One of the tough parts about this is how much money these players are taking up in salary cap space. The 5 players mentioned above are eating $20,675,000 of cap space. If you include Milan Lucic, that number climbs to $25,925,000. The only contract expiring at the end of this season from that group will be Tyler Pitlick. That means that $24,175,000 will be on the books for next season tied up in Monahan, Coleman, Backlund, Dube, and Lucic, during a time when the Flames need to re-sign Gaudreau, Tkachuk, Mangipane, and Kylington to new contracts.

The Flames defense is also not helping the secondary scoring. As of December 11th, the Flames rank 11th in the Western conference in goals by defensemen with 8. Only the Canucks, Blackhawks, Stars and Kings have less.

Where Do We Go From Here?

The easiest, and most cost-effective thing to do would be to call up Jakob Pelletier from AHL Stockton. By all accounts, Pelletier has had an outstanding season with the Stockton Heat. He has 25 points in 19 games so far this season and currently sits 2nd in AHL scoring. He could certainly bring a spark to the 2nd or 3rd line.

Because of the Flames tight cap situation and pending RFA’s and UFA’s they need to sign, they likely can’t bring in a big name, big salary player. There are a couple cheap, intriguing right shot RWers who may be available like Mason Appleton (SEA) and Tage Thompson (BUF) who could help. But those guys likely won’t move the needle.

They could make a move for more expensive players like Tyler Toffoli or Connor Brown. But the issue is that Montreal or Ottawa would have to eat a portion of the players salary which makes the trade more expensive for the Flames and I am not sure it would be worth paying a big price for those players.

The growth and improvement for this team will need to come internally. Monahan, Backlund, Coleman, Dube and Pitlick all need to step up their games. It is on them and the coaching staff to put them in the best positions to produce offense. Maybe that means splitting up the top line for a bit to balance the scoring. Maybe it means calling up Jakob Pelletier.

Overall, this team needs to get more production from the bottom of their lineup. Or else they’ll be in trouble come playoff time when you need contributions from everyone.

All Stats Courtesy of Natural Stat Trick and Cap Friendly