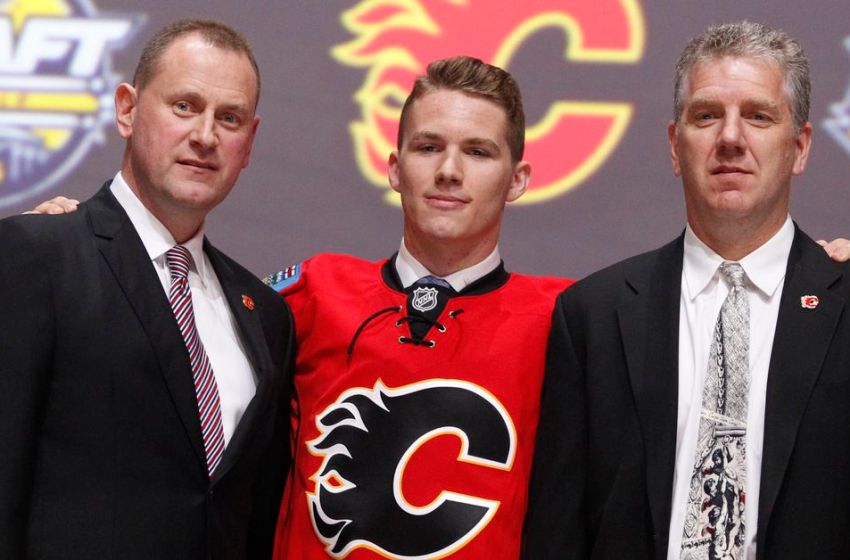 The Treliving Chronicles is a 4-part series breaking down every aspect of Brad Treliving’s seven-year tenure with the Calgary Flames as their General Manager. There have been a lot of ups and downs over his time in Calgary and I will be breaking down every major decision he has made to make the team and organization what it is today.

Today, I will be breaking down the Flames drafting record with Treliving in charge. We will only be analyzing the 2015-2020 drafts. The 2014 draft will not be featured because Treliving was hired about a month before the entry draft. Lots of the Calgary media members believe that Brian Burke had a major influence on the 2014 Flame selections.

First, let’s make note of the GM’s role in the NHL Draft. The job of the GM is to establish what qualities a Calgary Flame must possess. This is a major decision that needs to be made and is critical for the future of the franchise. Treliving did a great job with this. It is obvious that skill, hockey sense, speed, and character have been established as the traits of a Calgary Flame. Gone are the days of Darryl Sutter and Brian Burke drafting for size and toughness out of the Western Hockey League. Give the GM credit for understanding that the future of the game is speed and skill and empowering his scouts to find players with those attributes. Another major role an NHL GM plays in the entry draft is with first round picks. GM’s do a lot of scouting of the top-rated talent in each draft class. They play a major role in who gets selected with their first-round pick. It is an important decision that alters the course of a franchise, and they want to have a say in the matter.

Aside from that, NHL GM’s let their director of scouting and their staff make the picks.

I will be breaking down the draft picks by tiers. I don’t want to spend any time on the Riley Bruce’s, or the D’Artagnan Joly’s of Trelivings history. Every team makes bad picks. Let’s look at the picks who have made impacts and will potentially make an impact in the future.

The Flames scouting staff did an excellent job with these four selections. Matthew Tkachuk has turned into the Flames most important player. He has every tool you could ever want in a great hockey player. He’s skilled, smart, tough and mean. He also has character traits that make him a very popular teammate, and likely the next captain of this organization. Tkachuk wasn’t a slam dunk to be picked at 6. Mikhail Sergachev and Clayton Keller were also in the mix at the time. Give the Flames credit for picking Tkachuk.

Not a lot of people talk about how good the Adam Fox draft pick was. To take a potential future Norris winner in the third round is an absolute grand slam. I wish Fox was more upfront with the Flames during the interview process, it would have been nice to know that his priority and dream was to be a New York Ranger. Nevertheless, it was a great pick and needs to be applauded.

Rasmus Andersson was another great selection in the second round. The right shot Sweede has turned into a core piece of the Flames blueline. He has all the tools to be a solid top 4 right shot D for a long time.

Finally, Andrew Mangiapane was one of the biggest steals in 2015. All Mangiapane has done in his career is score at every level he has played at. He is a legit top 6 winger and drives play better than most players on the Flames. He leads the team in even strength scoring in the 2021 season. Hopefully the Flames are able to sign him for a long time. He is the type of player you win with.

The Flames scouting staff has done another good job with this grouping of players. I think Valimaki has the potential to be in that top tier of Flames draft picks, but I haven’t seen enough of him quite yet to anoint him to that group. I expect big things from him next season as he will be 2 years removed from his devestating knee injury. There are a lot of examples in the NBA and NHL of players breaking out 2 seasons after a major knee injury.

Dillon Dube has shown flashes of brilliance in his young NHL career. Most notably in the bubble playoffs in Edmonton. He scored 4 goals in 10 games and dominated on a line with Sam Bennett and Milan Lucic. He hasn’t found a consistent high end game in the NHL just yet, but I think he can be a very good top 6 winger in due time.

I personally think Oliver Kylington has been shafted by the Flames. I don’t think they have gave him enough of an opportunity to show what he can do at the NHL level. He has the skill and skating to be a future top 4 D man. But I don’t think that’ll be happening under Darryl Sutter. But I still think it was a good draft pick.

Finally, there is Jakob Pelletier. I am a huge fan of this player. I think he has all the tools to be a core member of the Flames. He is a prolific scorer in the QMJHL, scoring 214 points in 150 games in his last three seasons. He also has great leadership qualities. He was a captain for the Moncton Wildcats and named captain of the Val d’Or Foreurs right after being acquired by them in a trade. I also loved this moment from him at the 2021 World juniors in Edmonton.

A common theme of this group is the fact that a lot of them are late round picks. I think the Flames scouting staff should be applauded for their ability to find talent in the late rounds of the draft. Something that is incredibly difficult to do. I don’t want too go in depth into this group, but I feel like there are some good players in this group who will one day play in the NHL, specifically Connor Zary, Dustin Wolf, and Adam Ruzicka.

Overall, I think the Flames have done a solid job with their drafting under Brad Treliving. His philosophy of prioritizing hockey sense, skill and character have paid dividends, especially with their late round selections,. And that should be recognized as a job well done.

The part that needs to be called out is Treliving’s propensity of trading 1st, 2nd, and 3rd round draft picks for immediate help. He got off to a great start when he shipped out Sven Baertschi, Curtis Glencross, Jiri Hudler, and Kris Russell for 2nd and 3rd round picks. But why did he stop making those types of moves? Why did he stop accumulating draft picks? It was a poor judgement call because he thought the 2014/15 ‘Find A Way Flames’ was the opening of a new contention window.  That season was a miricale. They were not ready to win and take the next step. But Treliving thought they were.

Great organizations value their picks and build their rosters extensively through the draft. The Calgary Flames were in no position to be trading away high quality draft picks from 2015-2018. This was a team who was 100% in a full on rebuild. It is inexcusable to be trading away draft picks 2 years into that process. I think this is a major reason as to why this is not a great franchise.

All Stanley Cup winning organizations build the core of their team through the draft. Boston, LA, Chicago, Pittsburgh, Washington, Tampa Bay. Those are the teams the Flames should be trying to compete with. In order to compete with them, you need to make as many selections in the draft as possible. You need an army of quality players to compete in this league, and I think that is something that Brad Treliving lost sight of, and it has cost this franchise dearly.

Between 2014-2019, Treliving has traded the following draft picks and received no picks in return:

That’s 11 picks in the first three rounds. All they got out of those picks were Brandon Bollig, Dougie Hamilton, Brian Elliott, Michael Stone, Curtis Lazar, Mike Smith, and Travis Hamonic. Imagine where the Flames could potentially be if they had made these selections instead of trading them away for the players listed above? The only teams to trade more first round picks in that time are the Pittsburgh Penguins, Washington Capitals, and Tampa bay Lightning. A common thread between those teams is that they have all won Stanley Cups in that time. Since the 2015 miracle playoff run, the Flames haven’t won enough playoff games to win a single round.

I know hindsight is 20/20 and the Flames wouldn’t have selected all of these prospects, but let’s take a look at some of the players who were drafted in the range of those picks that were traded away:

This gives Flames fans an idea about some of the talent this organization has missed out on because the GM decided 2 years into a rebuild that the time to win is now. He rushed the rebuild and it led to the team winning a total of 3 playoff wins since 2015.