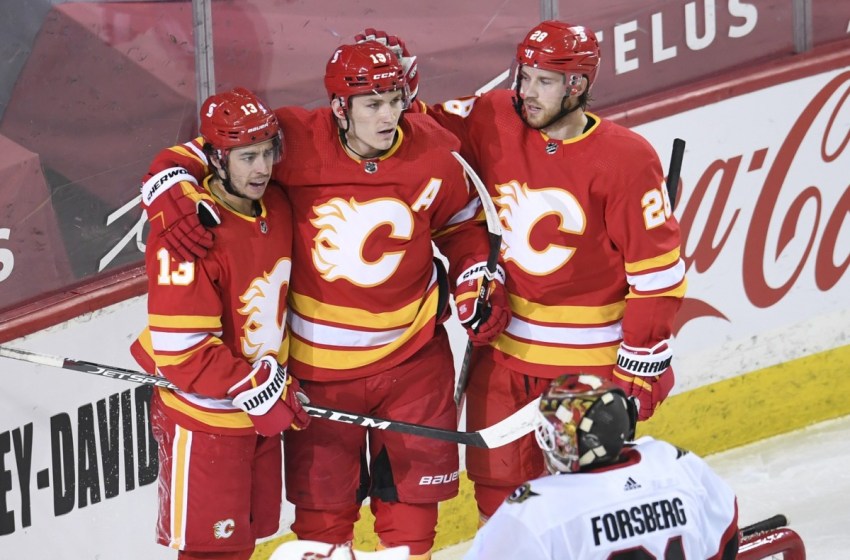 2021 has not been the most enjoyable year for Flames fans. But there have been some great moments and things happen to the franchise for the better. Let’s take a look at my top 8 moments and stories of 2021 for the Calgary Flames.

This has been the biggest turning point for the Flames franchise in quite some time. On February 4th 2021 after a 7-3 victory over the Ottawa Senators, Brad Treliving fired Geoff Ward, and hired Darryl Sutter as the 19th Head Coach in Calgary Flames history.

This move was desperately needed as Ward was clearly not the right person to lead this Flames team. His messaging in the media blaming the players for not caring and not working hard enough obviously lost the room and respect for the coach.

Sutter joined the team and immediately changed the culture and the way the Flames play on the ice. Since Sutter took over dating back to last season, the Flames are 4th in CF%, 5th in SF%, 5th in xGF%, and 4th in HDCF%. Sutter has turned Flames into a top 5 possession team and has them playing a style of hockey that can translate into playoff success.

This is the first time since Darryl last coached the Flames that they have brought in a legitimate top 10 bench boss to coach this team. That investment is paying off nicely for the Flames so far.

2. Mangipane at the World Championships

One of the few good things to come out of the pandemic shortened season for the Flames was the emergence of Andrew Mangipane. Flames fans knew they had a great player in Andrew, but the rest of the league did not know this until Mangipane hit the ice at the 2021 World Championships.

Team Canada was 0-3 before Mangipane was able to join the team after his quarantine. He made an immediate impact as he put up 8 points in Canada’s last 4 round robin games and led them to a 3-0-1 record, which just barely got them into the medal round.

He went on to score the OT winner VS the top seeded Russians in the quarter final. He scored the game winner in the semi finals VS the US which helped lead Canada to the gold medal game VS the Fins.

Mangipane was named tournament MVP and was added to the list of players Hockey Canada would be scouting for the 2022 Olympic roster. What a coming out party for the Bread Man.

One of the great things to come out of 2021 from Flames perspective was the line combination of Johnny Gaudreau – Elias Lindholm – Matthew Tkachuk. This line has been absolutely dominate since being put together by Darryl Sutter at the end of the 2021 season.

This line has played 44 games together dating back to last season, and they have put up some fantastic numbers.

Not only have they put up outstanding numbers, but they have also been a ton of fun to watch. Their elite vision, quick puck movement, and highlight reel goals have been a treat to watch.

It is fair to say that the majority of Flames fans were worried about what the left side of the defense would look like in the 2021/22 season after losing Mark Giordano in the expansion draft. Would Juuso Valimaki be able to take the next step? Could Nikita Zadorov fill that hole?

The one guy I think we all forgot about was Oliver Kylington. And we didn’t forget about him because of his skills or his previous on ice play. It’s because the organization refused to give him long looks and opportunities at the NHL level.

Kylington has thrived after being put on a pairing with Chris Tanev in the preseason. He has shattered all expectations and is having a breakout season.

As of December 31st, at 5 on 5 among all defensemen, Kylington is tied for 9th in scoring, and is 31st in CF%. That is incredible considering the fact he only played in 8 games last season and was the 8th or 9th defenseman on the Flames depth chart heading into training camp. On top of that he is incredibly fun to watch. His end to end rushes and highlight reel goals have been a bright spot for the Flames this season.

I don’t think Adam Fox knew what he was in store for when he arrived at the Scotiabank Saddledome for the first time in his career. Flames fans certainly did not forget about what Adam Fox did to the Flames organization after they took him in the 4th round of the 2016 draft.

Flames fans boo’d Fox every time he touched the puck. Fox had a goal disallowed and was a -2 in a 6-0 beat down of the Rangers.

On top of all that Matthew Tkachuk scored one of the goals of the season going top shelf between the legs while moving backwards.

This was one of the most fun, entertaining Flames games we have seen in some time.

The Flames were lucky to be able to draft Matthew Coronato with the 12th overall pick of the 2021 draft. Coronato scored at an unbelievable pace in his draft year with the Chicago Steel of the USHL. In 59 regular season and playoff games, Coronato scored 59 goals. The Flames have not drafted this gifted of an offensive player since they took Matthew Tkachuk 6th overall in 2016.

The Flames had some luck on their side. The Ottawa Senators went completely off the board with their 10th overall selection as they took Tyler Boucher of the US NDP. Boucher was projected to go late in the first round, or in the second round of the draft. This move allowed the Flames to draft one of Cole Sillinger or Coronato with their pick. Thank goodness for the incompetence of Pierre squared (Dorion and McGuire) in Ottawa.

My guess is that Coronato will sign with the Flames at the end of his college season and will play a big role for Calgary as early as next season.

Most Flames fans were not happy with Brad Treliving when he signed then free agent Chris Tanev to a 4 year 18 million dollar contract, myself included. Tanev had not played a full season in the NHL, and looked to have taken a step back in his play. This seemed like another Treliving dud signing that we have all become too accustom to over the last 8 years.

But Tanev has proved the fan base wrong. He has been fantastic since joining the Flames. He has been the Flames most consistent and best defensive defenseman.

The most impressive part of his game has been his ability to make people around him better. Noah Hanifin played the best hockey of his career with Tanev in the 2021 season. And this season Tanev has helped bring along Oliver Kylington, which has been one of the most important elements of the Flames success this season.

By all accounts, Tanev is also a great leader and mentor for young players in the Flames dressing room. I believe he has helped change the culture in Calgary along with Darryl Sutter and Jacob Markstrom.

Give full credit to Brad Treliving on this one. Tanev has been excellent in Calgary.

8. Entertaining Game VS Pittsburgh at the Dome November 29th

We’ll finish off the list with another entertaining, fun game at the Scotiabank Saddledome.

The Flames defeated the Pittsburgh Penguins 2-1 in a shootout on November 29th, 2021. This game had it all. Fast paced play, great goaltending, star power, exciting 3 on 3 OT and a long shootout.

These are the types of games that make the game of hockey so great.

All stats are from Natural Stat Trick and Hockey DB