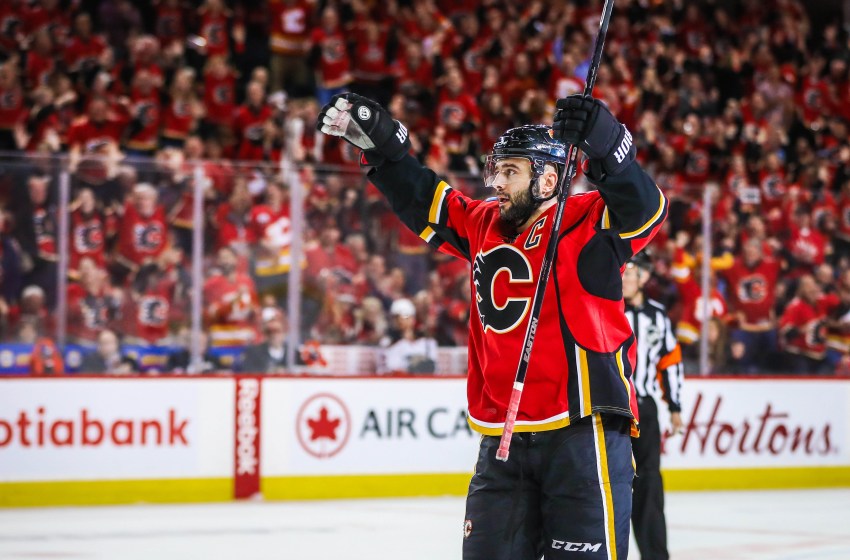 Apr 17, 2017; Calgary, Alberta, CAN; Calgary Flames defenseman Mark Giordano (5) celebrates his goal against the Anaheim Ducks during the second period in game three of the first round of the 2017 Stanley Cup Playoffs at Scotiabank Saddledome. Mandatory Credit: Sergei Belski-USA TODAY Sports

The Flames have to submit their protected list for the Seattle expansion draft this Saturday, July 17th. We all expect that they will go with a 7-3-1 protection model. Mark Giordano will likely be unprotected in favor of Chris Tanev, Rasmus Andersson, and Noah Hanifin.

What should the Flames do with Mark Giordano?

There are 4 realistic options the Flames have.

This is simple. The Flames would allow Seattle to select their long-time captain for nothing. Seattle could keep him on the roster or flip him for a pick after the expansion draft. If the goal for the Kraken is to make the playoffs, they will surely keep Mark Giordano and likely name him the first captain in franchise history.

The issue with this route is that the Flames will lose their captain for nothing and to a division rival. That can’t sit well with Brad Treliving and the management group.

The positive side is that the Flames will have an additional 6.75M of cap space to work with this offseason. My concern is, how will that cap space be used? They will need to find a replacement for the left-handed defenseman, which there are not many available this offseason. I worry about an Oliver Ekman-Larsson trade in this situation.

2. Leave Giordano Unprotected. Pay Seattle Not to Select Him.

This is the worst option for the Flames. I don’t think Brad Treliving should pay Seattle to not take Mark Giordano. I know he has been in Calgary for a long time and has been a great soldier. But you can’t be giving up a 2021 1st or 2nd round pick to keep a 38-year-old with 1 year left on his contract.

I don’t think the Flames are in any position to pay an “exorbitant” price to keep Gio.

3. Trade Giordano Before the Flames Protection List Is Due (July 17th)

There is the option of trading Mark Giordano for an asset before the protection lists are submitted. The only teams that would be able to protect Gio in the expansion draft and handle his cap hit would be Arizona Coyotes, Buffalo Sabres, Detroit Red Wings, LA Kings, New Jersey Devils, and Ottawa Senators. The Flames would likely have to eat between 1-2 million dollars in salary. In exchange they might be able to get a 3rd or 4th round pick.

The team who acquires Gio could either trade him after the expansion draft or hold on to him until the trade deadline where they could get a solid return for the Flames captain.

In this situation the Flames would receive an asset for Giordano, and likely lose one of Derek Ryan, Oliver Kylington, or Matthew Phillips.

4. Protect Giordano in The Expansion Draft by Using an 8-1 Protection Model.

I think this is the option Flames fans would like the least. If the Flames were to go down this road they would protect Matthew Tkachuk, Johnny Gaudreau, Elias Lindholm, Andrew Mangipane, Mark Giordano, Chris Tanev, Rasmus Andersson, Noah Hanifin and Jacob Markstrom.

This would leave Sean Monahan, Mikael Backlund and Dillon Dube exposed to Seattle. Dube would likely be selected, and I don’t think the Flames want that happening. Dube has shown glimpses of being a high-quality top 6 forward. A lot of people think that he is only scratching the surface of his potential.

What I Want the Flames to Do

Option 3. I think trading Mark Giordano before July 17th makes the most sense. If the opportunity is there to receive an asset for Giordano, why would you not take it if you’re Brad Treliving? It certainly would be better than allowing Seattle to take him for nothing. There are teams who can take on his salary and protect him in the expansion draft. This trade would require finesse from Treliving and won’t be easy to make. But if he can, he should pull the trigger.

The pickings are slim once you take away Mark Giordano from the Flames unprotected list. All that is left of quality to the Kraken are Oliver Kylington, Derek Ryan, and Matthew Phillips.

This is an extremely tough situation for the Flames to be in. Losing your captain to a division rival is not ideal. But they have to do what’s right for the future of the organization. I think getting an asset for Mark Giordano is the most prudent move Treliving can make.