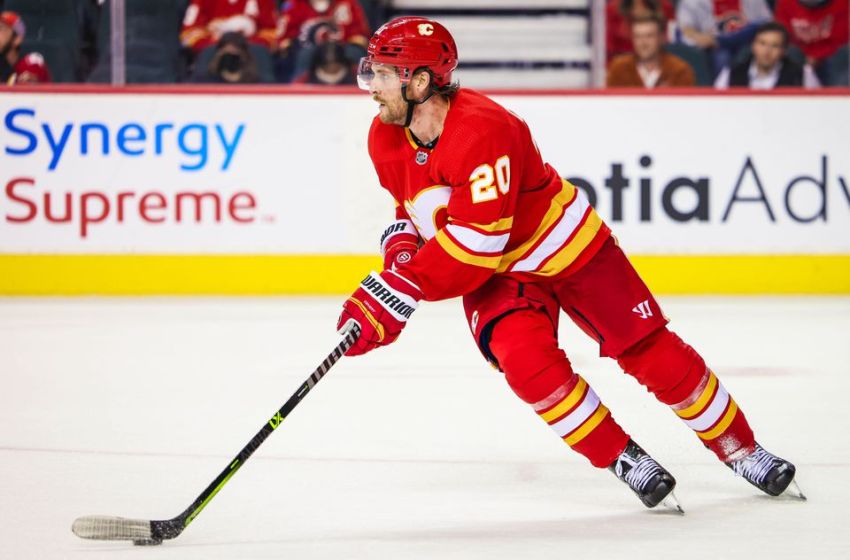 The Flames head into another season with the same core group of forwards as in years past. General Manager Brad Treliving was not able to find a trade partner and receive appropriate values for players like Sean Monahan, Johnny Gaudreau or Mikael Backlund. However, he was still able to add some high-end talent to the forward ranks by signing Blake Coleman to a 6-year contract worth 4.9 million dollars per season.

There are a lot of differing opinions on who Coleman is as a player. Some say he plays like a first liner while others believe he is nothing more than a third liner.

Let’s take a look at some stats and video to see what exactly the Flames are getting in Blake Coleman.

First, let’s get the contract out of the way. It’s not a good deal for the Flames long term. Coleman is 29 years old and will turn 30 this season on November 28th. Giving 6 years to a soon to be 30-year-old free agent is never a great idea. But Coleman, unlike Troy Brouwer and James Neal, should provide value to the Flames in at least the first 2-3 years of the deal. He is an above average skater, which was not the case for Neal and Brouwer.

After 2-3 years, the deal it may get ugly, but he should be a good player for the Flames in the short term. It is fair for fans to criticize the Flames for the deal he signed.

Blake Coleman is a high-end finisher in the NHL. In his last 3 seasons, he has scored at a 23, 26, and 21 goal pace (over an 82-game season) respectively which puts him in the upper echelon of 2nd line forwards. He has scored 38 goals at 5 on 5 which is good for 56th in the NHL during that time. He has scored the same or more goals at 5 on 5 than players like Anze Kopitar, Brock Boeser, Blake Wheeler, and Ryan Nugent-Hopkins.

He has scored at a good pace without having a crazy good shooting percentage. In his last 3 seasons he has had shooting percentages of 7.56%, 8.64%, and 9.38%. This tells me that Coleman has the ability to score at a consistent level and doesn’t rely on luck to have big goal scoring numbers.

One thing to point out is that Coleman is not the kind of forward who can score goals without having to rely on his teammates. Almost all his goals he has scored in the last two seasons are on one timers, rebounds, and tips. He has an above average shot and does a good job using his speed to put him in positions to score. But very rarely do you see Coleman come down the wing a snipe one past a goalie, or skate around the offensive zone with the puck and score a goal.

Flames fans can expect Coleman to score 22-27 goals this season. Especially if he sticks on a line with high end players Elias Lindholm and Matthew Tkachuk.

Blake Coleman is more of a goal scorer than play maker. In his last three seasons Coleman has been on pace for 15, 14 and 25 assists. Last year was the first time in his career that he had more assists than goals. He ranks 239th in 5 on 5 assists with 34 since 2018/19 season. In that same time period, Milan Lucic has 33. Suffice to say, Coleman is not a great distributor of the puck. You won’t see him making Johnny Gaudreau or Matthew Tkachuk type passes. But what he is good at is creating offense through his forechecking and his ability to win battles.

One thing I found surprising is that Coleman is one of the league leaders in hits. Since 2018/19, Coleman ranks 17th in the NHL in hits among forwards at all strengths with 525. He is one of the top forecheckers in the NHL and does a great job using the body to ware down opposing teams’ defenseman. Darryl Sutter is going to love that aspect of Coleman’s game.

However, one thing you won’t see is Coleman dropping the gloves much as he has only had 3 fights in his last 3 seasons. That will not be an issue as the Flames employ the likes of Milan Lucic, Erik Gudbranson, and Brett Ritchie.

Coleman has a little bit of a Matthew Tkachuk attitude to him. He does a great job at getting under opposing player’s skin. His relentless work ethic and physical play make him a real pain in the you know what to play against. That attitude and work ethic is exactly what the Flames are going to need in the playoffs.

Don’t expect to see Blake Coleman on the Flames first powerplay unit. Historically he has not played much on the PP. But we need to keep in mind that he played on a deep, talented Tampa team the last couple seasons. Coleman barely played in the preseason, so I am not sure if he will play on the Flames second unit.

Since joining the Lightning in 2020, Coleman has been a very strong possession player, especially last season.

Coleman and his linemates dominated at 5 on 5 last season while going up against opposing teams top 2 forward lines on the vast majority nights. This should be an encouraging sign for Flames fans as he did this with lesser linemates than what he will have to work with in Calgary. Between an elevated role and better linemates, Coleman is primed to have a career year in 2021/2022.

Overall, I would expect Coleman to be an effective player for the Flames this season. Fans can expect a hardworking, physical, defensive oriented player who can score 20+ goals. Sounds like the perfect Darryl Sutter player if you ask me.

All stats are courtesy of Natural Stat Trick