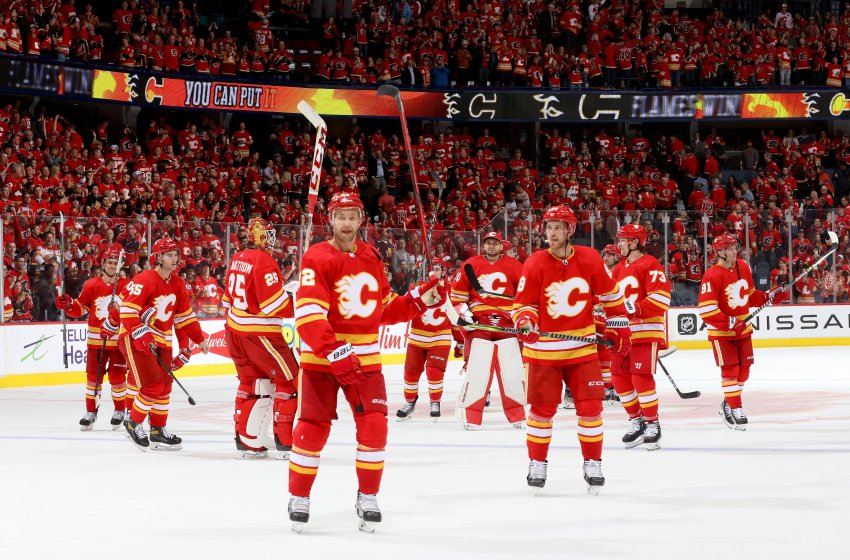 The Calgary Flames have been pushed by the Dallas Stars to a game 7 at the Scotiabank Saddledome on Sunday night. This has the potential to be a franchise altering game for the playoff scarred Calgary Flames and their fan base. What is at stake come Sunday? A ton to say the least.

The Future of Johnny Gaudreau and Matthew Tkachuk

Winning on Sunday will go a long way in convincing Gaudreau and Tkachuk that they can win now in Calgary with Darryl Sutter behind the bench. Both players are extremely competitive and want to win badly. Advancing to the 2nd round and potentially a 3rd and 4th round would go a long way in getting long term contracts signed in Calgary.

The Flames also have their core players who are in the prime of their careers signed to good contracts (Markstrom, Andersson, Hanifin, Tanev, Lindholm, Coleman, Backlund, Dube, etc.). This team will have a chance to win for another 3-4 years if Johnny and Matthew decide to stay.

The question will be “will both 13 & 19 want to return to Calgary on long term contracts?”. Both players desperately want to win consistently in the playoffs. They will likely ask themselves if they can achieve that goal wearing the flaming C, especially after losing to an inferior Dallas Stars team.

Gaudreau has been part of one series win and has only played in 31 playoff games at this point of his Flames tenure. Since the 2015/16 season, the Flames only have 6 playoff victories, 3 of those coming in this series VS Dallas. Is that going to deter Johnny from staying in Calgary?

Tkachuk has had some drama surrounding him going back to the 2021 bubble season. There have been rumors from Andy Stricklund (who is close with the Tkachuk family) that he wants to play closer to his family and friends in St Louis. Could a game 7 collapse and pressure from the fan base for not performing in the playoffs put Tkachuk over the edge and make him want to leave Calgary?

This one is simple. If they Flames win, Brad Treliving, Craig Conroy, and Don Maloney will likely keep their jobs.

There could be serious changes coming to the front office staff if the Flames are bounced from the 1st round by the 7th seed Dallas Stars. Flames ownership has been incredibly patient with this current management team. But that might change if they lose on Sunday.

Treliving and his team have done a lot of good things for the Flames over the past 8 years. Their drafting and developing has improved significantly. They’ve been able to re-sign their own players to good contracts. The Lindholm/Hanifin trade was a steal. And most importantly, they are all good people and great leaders. The hockey side of the Flames is run very well from an operational standpoint. There is no denying that.

But there have been some negatives that could warrant moving on from the group. This management team has had very little success in the post season. They have one series win and 7 wins in their last 5 playoff series. 3 of those coming against Dallas this season. They have gone through 5 head coaches in 8 seasons, including the disastrous hire of Bill Peters. And they have botched player acquisitions like Travis Hamonic, Troy Brouwer, James Neal, Brian Elliott, etc.

A game 7 loss might be the straw that breaks the camels back for Brad Treliving & co. I can’t see Flames ownership taking a 1st round playoff exit well, especially after the regular season they had.

I believe the Flames came very close to hiring Mike Futa last offseason. If the Flames lose in round 1, don’t be surprised to hear that name pop up again.

Fan interest in the Flames will be at an all time high. A big game 7 win on home ice would energize the city and keep people believing in this organization. It would create “where were you moments” for the fans. And most importantly, it will keep a fragile fan base believing in the brand. On top of that, ticket sales, merchandise sales, and TV/radio ratings will likely increase significantly which are the main revenue sources for the Calgary Flames.

The Flames fan base is going to be incredibly disappointed if the Flames lose game 7 based off interactions I’ve seen on Twitter, Reddit, Facebook, and the Fan 960. A lot of people would lose interest in this team, not go to as many games next season, not renew season tickets. The repercussions of a game 7 loss would cut deep in the Flames ability to generate revenue moving forward. The belief in the brand would be broken.

The Flames were struggling during the regular season to sellout the building when they were allowed to have full capacity. And that was during the 2nd best regular season in franchise history with two 100 point players on the roster. Imagine what will happen to ticket sales if they lose to the Stars?

Fan interest on TV, radio, podcasts, blogs, ticket sales, merchandise sales, will all take a hit if they can’t close out this series. Flames ownership will be on pins and needles watching how things play out on Sunday. There is a lot of money on the line for them.

Direction of the Organization

The Flames will have a better chance to keep Matthew Tkachuk and Johnny Gaudreau long term. Keeping 13 & 19 with this core and Darryl Sutter as coach will keep the Flames a perennial playoff team for another 3-4 years.

As we established earlier in the article, the Flames will have a more difficult time keeping Gaudreau and Tkachuk long term If they lose this series to the Stars.

Hypothetically speaking, if Gaudreau and Tkachuk were to leave Calgary, the Flames would have to make a tough decision. Do they continue to try to be competitive and make the playoffs without their 100-point superstars? Or do they go into a full rebuild?

The Flames would still have a strong core group of players who are in their prime to work with. Elias Lindholm, Mikael Backlund, Andrew Mangipane (assuming he signs), Blake Coleman, Tyler Toffoli, Dillon Dube, Rasmus Andersson, Noah Hanifin, Chris Tanev, Oliver Kylington (assuming he signs), and Jacob Markstrom. That is a solid foundation to build on especially with Darryl Sutter behind the bench.

But it does not seem like the type of team that will win a Stanley Cup. Where will the goals come from? Gaudreau and Tkachuk carried the Flames offense this season.

I still think the Flames are going to win this series. They are the better team and have played good enough to win. But if they don’t, we could see seismic changes to this organization moving forward.