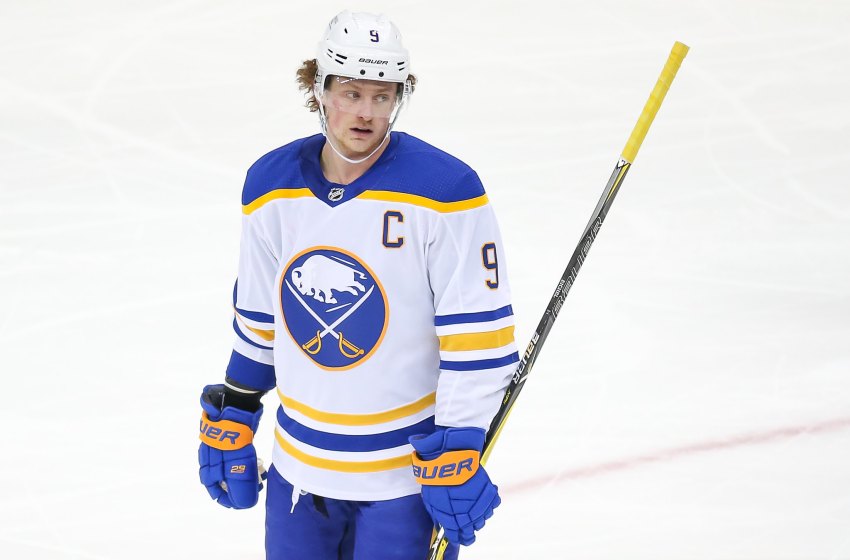 Now that the expansion draft, entry draft and free agency have come and gone, the hockey world’s attention is on the Jack Eichel sweepstakes.

The situation with Eichel and the Sabres is getting uglier by the day. But that doesn’t seem to bother Sabres GM Kevyn Adams. He is willing to hold on to Eichel until he can get what he thinks is fair market value for their former franchise center and captain.

There are rumored to be multiple teams who are seriously inquiring about Eichel. David Pagnotta from The Fourth Period has linked the New York Rangers, Vegas Golden Knights, Anaheim Ducks, Boston Bruins, Columbus Blue Jackets, and our Calgary Flames to the star center.

Out of this group of teams, who has the best shot to land Jack Eichel in a trade?

I am breaking this down into 3 categories and giving a score out of 10.

There are a few things to note:

The New York Rangers have a ridiculous amount of talented, young players who could be included in a Jack Eichel trade. They can absolutely make this trade work. But it will come down to who Chris Drury is willing to part with. The rumored ask from Buffalo starts with Kaapo Kakko or Braden Schneider. It sounds like those are two players the Rangers are refusing to include in a deal. We will see if that changes in the coming weeks.

The Rangers cap situation is about to get extremely tight, especially if they were to take on Jack Eichel’s $10M. New York will have to sign Igor Shesterkin this summer, then sign Mika Zibanejad, Kaapo Kakko, Vitali Kravtsov, and Adam Fox next offseason. Maybe the Sabres can eat some cap space? The problem is that would increase the acquisition price even more.

Rangers owner, James Dolan, has proved that he is extremely impatient this past season when he fired both Jeff Gorton and John Davidson as GM and President because he did not like the speed at which their rebuild was taking place. When Dolan makes his mind up on something or someone, no one can stop him. If his mandate is for the Rangers to acquire Jack Eichel, he will get Jack Eichel. Chis Drury has also shown a willingness to be aggressive and make bold decisions as he has drastically changed the identity of the Rangers by acquiring hardnosed players like Barclay Goodrow, Sammy Blais, and Ryan Reeves.

The Ducks can be a front runner for Eichel if they are willing to throw in one of Trevor Zegras or Jamie Drysdale in the deal. That will be an incredibly difficult decision as both Zegras and Drysdale look like they’re going to be outstanding players in the NHL for a long time. I don’t think Anaheim has a chance to acquire Eichel without one of those two players being in the deal.

Anaheim has $19,180,000 in available cap space. They don’t have any major contracts to sign within the next two years. They could easily acquire Eichel without sending out any money. They are in the best cap position of any of the suitors for him.

Bob Murray is a fairly conservative GM. His owner, Henry Samueli, has been know to have the Ducks on a tight budget in the past. This management group does not have a track record for being the most aggressive in the NHL.

It is a bit of a head scratching decision as to why the Ducks would want to acquire a player like Eichel at this stage of their rebuild. Does adding Jack Eichel to the Ducks make them a contender? I don’t think it even makes them a playoff team. The Ducks should keep rebuilding and adding young talent to their roster like they have been. Good things will happen if they stay patient.

Columbus is in the beginning stages of a full on rebuild. That’s why I have a hard time seeing them trading their 2022 1st round pick and multiple prospects in a win now move. I know Columbus has been looking for a franchise center to build around, but by the time they’re competitive again, Eichel’s contract will be coming to an end. What does acquiring Eichel accomplish for the Jackets over the next 4-5 years?

The Jackets have $11,234,138 of cap space with no one of significance to sign this summer. They could make a Jack Eichel deal work for this upcoming season. But one thing to keep in mind is that next season, Zach Werenski’s new $9.5M contract kicks in, and they’ll have to sign Jonas Korpisalo/Elvis Merzlikins, Adam Boqvist, Emil Bemstrom, Jack Roslovic, and Patrick Liane. Fitting all those pieces and Eichel won’t be easy for Columbus.

Jarmo Kekäläinen and John Davidson have proved in the past that they’re not afraid to make major changes to their team. Just look at the 2018/19 season when they held on to pending free agents Sergei Bobrovsky and Artemi Panarin and acquired Matt Duchene, Ryan Dzingle, and Adam McQuaid for a playoff run. This management group is not afraid to take a home run swing.

The Flames group of players who could be traded is not quite as good as what some other teams can offer. Especially in the form of high-end prospects. Calgary doesn’t have a Trevor Zegras or Kappo Kakko to build a deal around. If Brad Treliving wants to take a real run at Eichel, he will have to provide quality and quantity. Rather than giving up four 1st round pick equivalents, they might have to add another draft pick and prospect on top of that to make up for the lack of quality compared to other teams.

The Flames only have $12,175,000 worth of cap space to work with this offseason. And they still need to sign Nikita Zadorov, Juuso Valimaki, Connor Mackey, Oliver Kylington and Dillon Dube. If the Flames were to make a trade for Eichel, a big salary would have to go back to Buffalo like Sean Monahan or Matthew Tkachuk. Monahan would obviously be the piece the Flames and their fans would want to part with. But does Buffalo want to take on that much salary for an injury prone center who has 2 years left on his contract? Monahan would also have to waive his partial NTC as Buffalo is likely on his 10 team no trade list.

The concerning part is what Calgary’s cap will look like next offseason. The Flames will need to extend Johnny Gaudreau, Matthew Tkachuk, and Andrew Mangipane, which will likely cost the team an extra $6.5M-$7M in cap space. It will be very difficult for Calgary to make this deal work long term. The Milan Lucic contract is a killer for them right now.

Brad Treliving has pulled off some big deals during his time in Calgary. He brought in Dougie Hamilton and Travis Hamonic for a 1st round pick and two 2nd round picks. He also has signed Troy Brouwer, James Neal, Jacob Markstrom, Chris Tanev, and Blake Coleman to large contracts in free agency. And he is usually in negotiations for every major player that comes available on the open market. Having said that, he has also been hesitant to pull the trigger on some major moves. The one that sticks out the most for Flames fans is the Mark Stone trade in 2019.

The Flames are the team that needs to make this deal happen the most. They are at a crossroads. Either you push your chips in and go for it, or you continue to meddle in mediocrity with the same group of players. They have 3-5 years to go for it if they acquire Eichel based off the age of their core players.

Vegas certainly has some nice pieces to offer up to Buffalo in an Eichel trade. The issue is that they lack the number high end prospects that Buffalo might be looking for. Would Vegas be willing to part ways with both of Peyton Krebs and Brendan Brisson? That would destroy Vegas’s prospect pool entirely. And do they want to part with a potential Norris Trophy candidate in Shea Theodore? It’s a lot to potentially give up for Jack Eichel.

It will be difficult for Vegas to work Jack Eichel’s $10M in their cap. The Knights currently have no cap space while still needing to sign Nolan Patrick to an extension. The Knights would have to trade out the salaries of multiple, high-end roster players to make the money work. Does shipping out guys like Krebs, Smith and Theodore for Eichel really make their team better?

If I could score the Knights a 15 I would. But I don’t want to break the rules. Bill Foley, George McPhee, and Kelly McCrimmon are not afraid to make bold, controversial changes to their team if they think they can get better. They traded locker room favorites Nate Schmidt and Marc Andre Fleury for a combined 3rd Round Pick in the last 2 off-seasons. If Vegas wants Eichel, they’ll find a way to make it work by any means necessary.

As of right now, there is not a front runner in the Jack Eichel sweepstakes. All reports indicate that it is wide open. But after completing this exercise, it is obvious that the New York Rangers have the best chance at landing Jack Eichel. Acquiring Eichel would instantly make New York a cup contender. They have done a wonderful job of collecting young assets over the last 4 years and they can easily afford to ship out 3-4 high end prospects in a trade for Eichel and not have it destroy their team’s future. The same can not be said for Vegas, Anaheim, Columbus, and Calgary.